Well, we finally have some decent weather here in Saskatchewan, with clear blue skies, and the return of some much missed migrants.
I have been out a few times since my last post and am happy to report that the Pelicans are back in town already at the weir.
Tree Swallows have also just arrived, and now Swainson's Hawks are making an appearance.

A juvenile Thayer's Gull is now currently residing at the roost close to the QE2 Power Plant. While not as exciting as last years Slaty-backed Gull. It is still a good species, and one that does not occur very often here.

Other species I have seen since my last post include :


A pretty nice sighting the other day while out with a friend, was a lone male, breeding plumage Lapland Longspur that had somehow lost or abandoned his flock.
Usually one will see this species skimming fields in huge numbers, so to see one bird perched on barbed wire was a real treat.
This shot also shows how the species gets its name.. Look at those claws! : 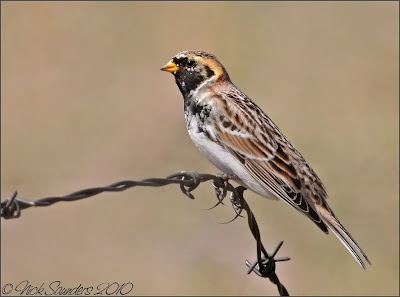 Here also, is an American Tree Sparrow , that came out from the bushes giving me a nice view : 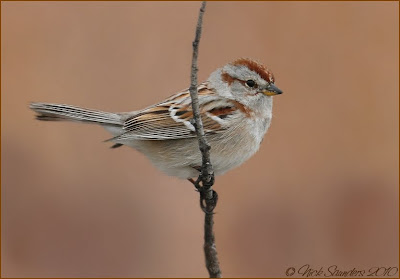 Excellent pictures.Spring is an exciting time of year.
Ruth

Lapland larkspur!!What a mouth full say that 5 times fast!! He sure has a set of claws on him!! What size bird is he? It is great to see the birds return and there calls fill the air. :)

Too many tree sparrow in my yard but I still enjoy them. I wouldn't have known what a Lapland larkspur was, thanks

A quick glance, and that Lapland Longspur looks so much like our Reed Buntings here Nick.
Great shots.

Hi Nick,
yes it is the time of the big spring migration here too. Let's hope this volcano will not perturb everything... I love your last shot a lot and congrat on this big list of birds!!

...ahhh...love the sweet American Tree Sparrow. I already miss ours!