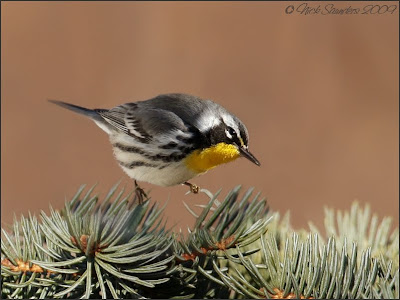 How lucky to capture a great photo of this little guy!! He sure is pretty..so glad you got to see him.

A beautiful bird.To be able to get pictures of it must be very special to you.
Blessings,Ruth

...he is gorgeous. I wonder what happened to his internal GPS!

Lucky you nick to get this one nice shot of this rare bird!! And it is a wonderful shot, with a nice background and a beautiful attitude... Somehow, I never manage to get a nice shot of a rare bird... Last time, I saw a yellow warbler but was unable to capture it and it has only been seen four times in Iceland... I guess I will have to wait for number 5 ;-)

Lovely shot Nick, and a rarity too; even better mate. Well done.

I have a surprise on my blog for you.. Check it out mate!

I say, he is very off-course, but it gave you a great photo - likewise the pileated, probably not off course, but a good photo for sure.

Hi Nick. It would seem that lots of small birds are getting tossed about by the severve weather patterns on both sides of the 'pond'. Excellent capture of this rarity. FAB

Thanks for looking friends