While it doesn't look or particularly feel much like Spring here in town, it is certainly milder than it has been and the snow is definitely melting fast.
This morning during 30k winds and cloudy overcast skies ,I went out with a friend to Holiday park and then checked along the waters edge beside the QEII power plant to try and re-locate the Snow Goose seen last Tuesday.
While we dipped on that particular bird, we had a nice fly-over from a mature Bald Eagle and my first 3 Ring-billed Gulls of the year.
There were also approx 30 Canada Geese on the ice and 2 Common Goldeneye.
Holiday Park yielded several House Finch, 2 Common Redpolls, 4 Black-capped Chickadees and a Downy Woodpecker.

About 15 minutes ago while putting out some Garbage, I was serenaded by, and then glimpsed an American Crow ( my first look at one this year )as it flew over our street.

Bald Eagle - Here is the Bald Eagle from today. Unfortunately the sky really was this overcast, even though sunshine was forecast yesterday !
These birds are always a thrill to see in the city though : 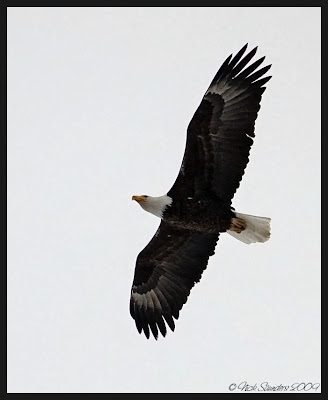 Wow! You can see them in the city -- amazing. Your great photo put me there looking up.

Great capture Nick ! Those overcast skies are so difficult for a decent looking flight shot.

Wow.....love the Bald Eagle photo!!! I just posted on eagles too, but I didn't see one...just reported on one nesting in our area near my aunt's cabin.

Thanks guys, I'm so fussy lately I nearly didn't post that photo at all!
The idea of this site is really to show what's out there though, so it would have been silly not to :-)

Your "bad" photos are my best on a good day...lol. Beautifully captured Nick. :c)

Love to see something like that fly over my place :)
Well caught.

Beautiful post today and the story is good reading too.

That's a beautiful shot,but of course I think Eagles are always beautiful.
Blessings,Ruth

Now that is a sight to see in the city!! He is gorgeous and even with the overcast in your weather you captured him very well!!

I don't care how many times I see an eagle in the wild it's always an impressive sight. If you're interested and want to see some great eagle photos, check out this guys site. http://www.alvinjamur.com/

How wonderful you are able to see Bald Eagles! I would take that as a sign of good luck.

Thanks everyone. Yep, those Alaskan Eagles sure look tame !

Well - happy spring to you - even if it might not feel that way yet!
But it's here - I have the pics to prove it! :)
Love the eagle shot!
Cheers, Klaus

Thanks Klaus. I still visit your site , just don't get alot of time to comment. Wonderful work as always.