Straight after work yesterday morning, I hiked over to Buena Vista, Gabriel Dumont & finally ended up at Diefenbaker Park.

I also managed to call in a Red Fox at Diefenbaker Park by imitating the distress call of a Cottontail Rabbit while in some thicker woods at the southern end. I was hoping something would show up, but really wasn't expecting it.
He came bounding out of nowhere , then as soon as he saw me, he bolted off in the same direction he came from. Very neat, and the first Fox I've seen this year.
There is also an active skunk den in this park. I didn't find the culprit of the smell, but I know he's in there as there were fresh tracks. There were also many Snowshoe Hare tracks around.

I initially though this handsome raptor was a Rough-legged Hawk, and hastily mis-identified it without consulting my guides. I should know better by now..
Thanks to a friend of mine Zoe, who alerted me by email, I was able to put two and two together!
This could very well be the same individual I found close to home on Christmas Eve last year, which funnily enough I identified as a Harlan's straight away!
Although similar to a Rough-legged Hawk at first glance , Harlan's lack the dark tail band and have a mottled/speckled pattern on the breast rather than a banded pattern : 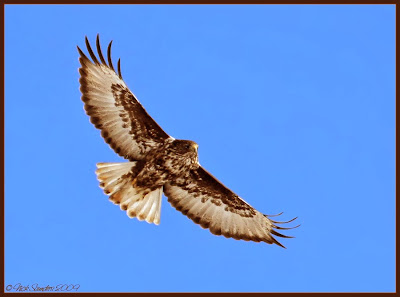 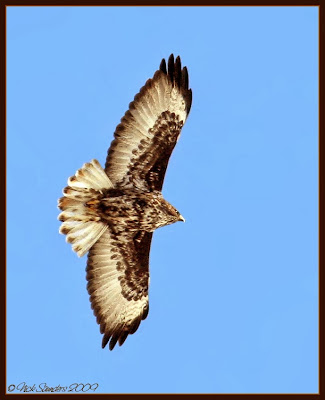 Beautiful in flight shots of this handsome predator Nick ! Sure had me fooled !

...I really like the coloring in this hawk. Beautiful.

Gorgeous pictures of this hawk.
Blessings,Ruth

Thanks for looking guys and for the kind words.

Nick, Absolutely gorgeous pictures of that hawk! Such a sight!! Wow!! Can you tell I'm really impressed!! Such a wing span!! :)
You really have quite a list of birds that you heard and sighted..and phishing a fox..sounds pretty cool!

just stunning.. what beautiful color on that tail..! and great job with the identification as well..