Yesterday afternoon , I spent 3rs walking the grounds of the Forestry Farm Park.
I had some interesting observations and ended up with 15 species, but because of the overcast conditions I only took a couple of photos :

Evening Grosbeak - Four of these birds flew directly over me in full 'flight song'. Had I not seen the yellow, I might not have believed it myself, as they are so seldom seen in town these days.
Great Horned Owl - I flushed a very large white individual from a stand of Jack Pines. I found it again later when I heard 4 Chickadees going ballistic.
Common Redpoll - Given away by their call, I found at least 10 of these.
White-breasted Nuthatch - 2 near the gardens.
Red-breasted Nuthatch - 1 in a tree next to the main office.
White-throated Sparrow - 1 straggler also near the gardens lurking under some juniper.
Dark-eyed Junco - 1 - Seen fleetingly ,right at the main entrance in some dense evergreen shrubs.
American Robin - 5 over-wintering birds at the far south of the park, sheltering from the wind.
Blue Jay - 1 at the south end of the park
Black-billed Magpie - 7 in various areas.
Common Raven - 1 near the wedding platform area.
Black-capped Chickadee - 10+
House Finch - A flock of 11 birds near the entrance.
Hairy Woodpecker - 1 heard near the zoo office.
House Sparrow - 5 or 6 chattering away in some bushes next to the mountain goat pen.

Also of note was this odd-looking Red Squirrel. It looks a lot like a cross-bred European-American Red Squirrel, with its ear tufts ,and different features such as its pinkish eyes. I found it sat in a tree very close to the pond : 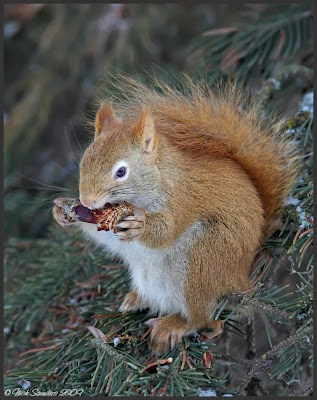 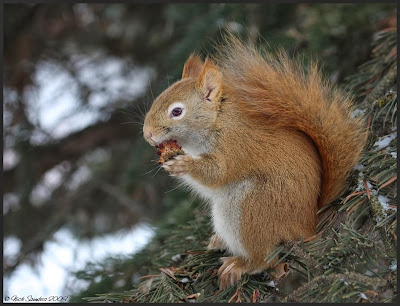 Hi,
Absolutely love your site. Would love for you to register and be a part our community.
Cagora
- Where Passions become Profitable
P.S. I back linked you

Oh boy! That is the cutest little thing...

I know he or she wouldn't stand for it, but I can't help wanting to feel that lovely fur. What a cutie! Thanks, Nick.

...that little squirrel is just adorable. He actually looks like the real Squirrel Nutkin!